All tattoos are created by injecting coloured pigment deep into the skin. Regardless of how the pigment is injected, the marks or designs are relatively permanent. People turn to dermatologists to have unwanted tattoos removed.

Nowadays, there are several methods for tattoo removal, which have proven successful, however, some scarring or colour variations remain. The success of tattoo removal depends upon several factors like size, location, the individual's healing process and how the tattoo was applied. A tattoo made by an experienced tattoo artist may be easier to remove since the pigment is evenly injected at the same level of the skin. An old tattoo may be more difficult to remove than a new one. Multi-coloured tattoos are relatively more difficult to remove than single coloured ones. 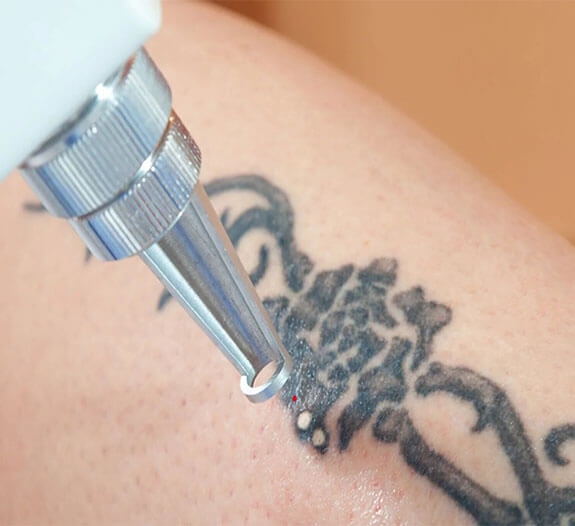 Many physicians consider laser as one of the best methods of tattoo removal. Nowadays, the Q-switched Nd: Yag, Q-switched, Alexandrite and the Q-switched Ruby are among the most commonly used lasers for the removal of unwanted tattoos. A local anaesthetic cream to be applied prior to the treatment to numb the skin. The laser is directed onto the tattoo, breaking up the tattoo pigment and then over the next few weeks the body's scavenger cells remove that pigment from the treated areas. Usually, multiple sessions (8 to 10 sessions) are necessary to remove the entire tattoo at intervals of four weeks. Usually, multi-coloured tattoo removal almost always requires the use of two or more laser wavelengths.

This laser is most suitable for darker skin. This laser wavelength is best absorbed by black colour tattoo pigments, hence, it is very effective to remove black coloured tattoos. It may be used in combination with other lasers for tattoos with red, green, yellow pigment.

Both the techniques may require local anaesthesia to numb the affected area because some bleeding is likely to occur and a dressing is applied immediately after the procedure to the treated area.
Regardless of which method of tattoo removal has been used, some variations in skin colour are possible to remain. Healing time varies depending upon the size and depth of the tattoo and the procedure used.

Side Effects of Tattoo Removal

Side effects are very less likely if it is treated by an experienced dermatologist but in some patients following side effects may occur:

Are You Sure you want to select Noida Clinic? Please Click the Cancel button to change the location of the clinic, else press Submit.